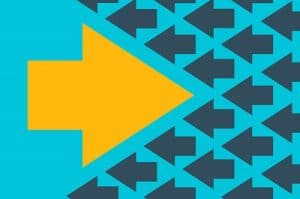 Are all change projects doomed to fail?

In almost every aspect of our lives, most of us crave a sense of routine. We have usually spent many years establishing habits and ways of doing things, so anything that disrupts those habits is often resisted.

What’s fascinating is that as individuals we are far more willing to embrace change than in an organisation or as a collective of individuals.

For example, as individuals in the 21st Century we have embraced technology widely and completely. So completely in fact that we cannot imagine our lives without technology. But at an organisational level, most people can name more than one business that failed to adapt to this change and was left behind.

During any of our discussions about organisational change, we universally hear the phrase that change is difficult. Whilst this statement is true, it also taps into a belief: if something is difficult, we are likely to fail at it.

In our experience this belief is the beginning of the end of any change initiative.

Our bias towards failure and our need for certainty are hardwired into our brains. A recent study from the University of Chicago found that we assume that failure is a more likely outcome of change than success. This biased belief creates a self-fulfilling prophecy. We immediately begin to look for evidence that supports the imminent failure of the change we are working towards.

This is as true for an individual who is struggling with a diet as it is for an organisation trying to change its culture.

Anecdotal evidence suggests that about 70% of change initiatives fail and most of these failures are attributed to negative employee attitudes and importantly, unhelpful management behaviour.

So first and foremost in your change planning is to answer a simple question: are your managers positive advocates for the change you’re trying to achieve?

If not, how can you get them on board? Look for the ‘bright spots’, as the Heath brothers describe in their book, “Switch.” Where are people engaging with the idea and what has helped them do so? What are engaged managers thinking and doing differently about change? Work with them and encourage them to share what they are doing with their peers.

Then how do we challenge the idea that change is likely to fail and stop people from making that belief into a self-fulfilling prophecy?

In the University of Chicago study looking at the negative reactions to change and the tendency for failure, researchers reminded participants how with a little dedication and a little effort, people generally improve at things over time. By priming the participants for success, the researchers completely eliminated the negative bias towards change.

We believe this is also true for organisational change.

So whenever we hear the phrase that change is difficult, we would do well to remind ourselves and our teams of this simple truth: we have successfully changed, learnt new skills and adapted to new ways of doing things our entire lives.

And we can do it again.